We're here ready to help you with all of your estate planning and elder law needs.
loading...
Carrier Law / Blog  / Just In Time For Christmas Gift-Giving… 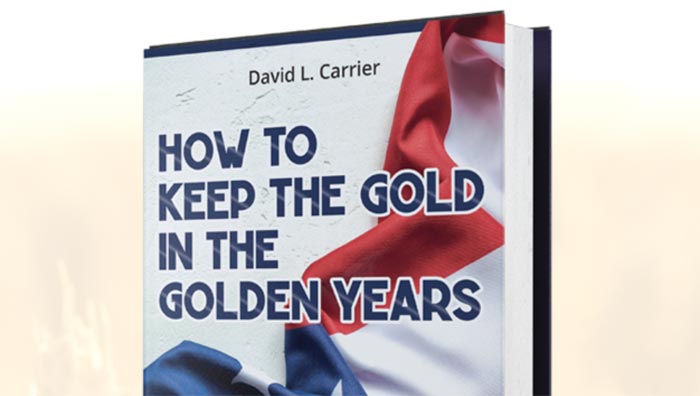 Just In Time For Christmas Gift-Giving…

NOTE: A professional journalist, a mild-mannered reporter for a great metropolitan newspaper (who wisely insisted on anonymity) made the mistake of sitting down to interview David about his new book, “How To Keep The Gold In The Golden Years.” Several hours later, Clark said he had enough material to write his own book. Would you like to know what they discussed? Read on…

PROCEED AT YOUR OWN RISK: The following is a blatant attempt to get you to buy David’s new book. You have been warned. You will also be delighted if you actually buy the book.

New book reveals how they wring out your lifesavings and hang you out to dry. Your Family’s Personal Attorney offers middle-class savers surprising insights so you can ‘keep the gold in the golden years’

David grew up when families were big, every kid had a paper route, and you stayed out until the streetlights came on. Boy Scouts, Girl Scouts, Kiwanis, YWCA. You worked because that is what good people did. And you saved. For the future. Education. You went to church, and you believed. “Do unto others…” “Let your ‘yes’ be yes, and your ‘no’ be no.” David might be a lot like you.

Guided by respect and love for America’s overlooked Middle-Class families. Seeing and solving regular folks’ problems. Maybe other lawyers and professionals just don’t get it. Can’t see? or Don’t care? Does it make a difference? Forty years working for you. Fighting Nursing Home Poverty. You earned the American Dream. You do not have to surrender.

They told him, “You cannot combine authentic humor and serious scholarship.” David said, “Hold my beer!” Read the book. Find out for yourself. Thousands already know. David’s “Elder Law Reporter” appears in almost all weekly newspapers. For some, it is the only reason to keep their subscription. Others clip their favorites. Some have a complete collection! For almost 20 years, his two-hour call-in radio show has been a beacon of wit and wisdom. Humor and insight, a powerful combination.

Growing his law practice throughout Michigan, David is an attorney who has focused on securing the future for middle-class families. By preserving their hard-earned money, they can choose how to live. And they can give advice! Having heard “You ought to write a book!” thousands of times, David is now sharing the mindset that illustrates and explains how to win by bucking the herd mentality to retirement planning.

David L. Carrier and his team of 50 attorneys, paralegals, accountants, and specialists, deliver elder law and estate planning results from offices in Grand Rapids, Holland, Norton Shores and Portage. Combing the archives, compiling true stories and real solutions from years of newsletters, blogs, and newspaper columns. David lays bare the truth that the system works against average individuals who work hard and follow the rules.

“How to Keep the Gold in the Golden Years: Protect Your Family Against Nursing Home Poverty,” is a fast-paced, entertaining read that will change the way you think about retirement and long-term care forever. Through real-life scenarios and accurate accounts demonstrating the widening gap between the experience of people who should be aging with grace and comfort and hard reality of nursing home poverty on bare government assistance. You have already done the hard work, but is it hard to believe that bad advice leads to poor results? See how those who plan properly have ensured that their lifesavings and estates serve themselves and their families. Not big-spending, self-important politicians and government bureaucrats.

“Middle-class families spend all of their lives working hard, saving more than they spend, paying down the house, hanging on to the family heirlooms,” said Carrier during a recent phone interview. “And then they go broke from long-term care bills. The inheritance is gone from that, or because their estates weren’t handled the right way, the taxman gets it all. It’s not right. It’s a shame, but that’s the way the middle-class has been getting screwed for a long time.”

Is there anyone who doesn’t like a free sample? One chapter, which is available to read for free, details how two women, close friends from high school, with similar lives made different choices. Drastically, tragically, different results. Carrier lays out the scenario, writing:

“Both couples were doing fine. Their homes were paid off and worth about $175,000. With $200,000 in savings and $75,000 of life insurance, they felt secure. Not to mention having prepaid their funerals. Each couple had three kids and three grandchildren. They even like the in-laws!

“You have friends like these women. Middle-class people who enrich the world. Generous spirits. Authentic kindness. Get it done attitude. Nice homes, colorful gardens. Debt free. Comfortable cash cushion (not that the kids would know). Coupon clipping and natural thrift. No extravagant or expensive habits. Except spoiling their grandchildren. But what is going on with Fred and Barney? Why does Fred put the car keys in the refrigerator? Barney gets so confused with the simplest things. And it is getting worse.”

One woman, Wilma, accepts reality and assistance. The program of all-inclusive care for the elderly, which she has paid for through her taxes, eases the strain. In contrast, her closest friend, Betty, rejects the very idea of help as nonsensical promises. But when then their men are stricken with Alzheimer’s, reality comes knocking on the door. Wilma’s husband, Fred, receives care from outside aides and the family keeps what is theirs. Betty, meanwhile, bears the burden of care for Barney, wearing herself out. Building a rickety financial house of cards that eventually collapses. Dooming herself and her unfortunate husband.

“Betty ran the race. Betty fought the good fight. At the ultimate cost to herself, she did what she believed was necessary. Rapidly pouring out the savings and accomplishments of a lifetime. All gone in the blink of an eye. Is there anything more tragic than needless suffering? When a good person refuses the helping hand, it is more than sadness. When refusal leads to catastrophe, it is more than regret.

“Wilma too ran the race, fought the good fight. Wilma had been there for Fred to the ultimate end. Hospice at the house. Familiar PACE folks who supplied the hospital bed, Hoyer lift and other necessary equipment and services. Given fair warning, the kids made it in from out of town. It was sad, heartbreaking. But not tragic. Surrounded by family and friends. Secure. At peace. What did the lord have in store for her now? Wilma did not know. But she looked forward to finding out.

“Most people, reading this article, will choose Betty’s path. Most people, faced with long-term care costs, close their eyes. Reject reality. Hope for the best. As lifesavings evaporate like a snowflake on a hot griddle.”

After 40 years practicing law, is it ridiculous to think that Carrier might have discovered the path that preserves what you own and protects what you value? That is the difference between Wilma and Betty. Forty years of experience have gone into the LifePlan™ system. Constant development that incorporates many strategies and delivers on three key goals: Keeping savings intact, paying for the continuing care, and getting beneficiaries what they deserve. Impossible? Maybe. Maybe not.

Carrier’s single-minded focus has resulted in:
• 50,000+ families attending Carrier LifePlan™ workshops.
• 15,000+ families trusting their security and their future to the LifePlan™ approach.
• $800,000,000+ dollars protected from lawsuits and long-term care.
• 2,000+ loved ones receiving the skilled nursing benefits they earned without going broke or accepting mediocre levels of care.

Carrier says that following the herd seems like the safe bet, but that when the herd has been stampeding off the cliff, for decades… well, maybe it would not be such a bad idea to consider an alternative path.

If most folks are losing, does that make losing a good idea? “I’ve got the plan for your family, and it’s been battle-tested to defend your ability to live as you want, not as you’re told. Haven’t you earned that right? I think so!”

The LifePlan™ secures families’ futures and gives middle-class Michigan the winning game plan. Carrier offers free sixty-minute workshops that start to answer the most frequently asked questions, including:
• Should I believe that it is impossible to protect my health, home lifesavings, family and legacy?
• Why is an outdated will worse than no plan at all?
• Do I want strangers making financial and medical decisions for me? Do I want to shut out my family and friends?
• How can I control the care I get (and do not get) in a medical emergency?
• Should I sacrifice my kids’ inheritance to accident, illness, divorce, bankruptcy, or their own poor choices?
• Are you against (legitimately) avoiding heavy taxes under the new IRA “reform” and “stimulus rescue” boondoggles?

Planning is critical for peace of mind not only for yourself, but also your family, Carrier said. Once you are in control and secure. A clearly structured LifePlan™ saves families and relationships from exploding during emotional times.

Carrier says too many people spend their lives focused on dying. Is it a good idea to be preoccupied with what happens to your wealth when you’re dead and gone? David stresses that you should live for you and your spouse first. Is your vision, your fondest wish, to enjoy exciting life experiences, volunteer work, helping with the grandkids’ tuition, or just relaxing at your cozy country cottage or cabin? Have you given up on the idea that you can achieve your personal goals working with your family’s personal attorney and the LifePlan™ Team?

“You can get in complete control of your future instead of having no control at all,” he said.