We're here ready to help you with all of your estate planning and elder law needs.
loading...
Carrier Law / Blog  / Is This a Time Like No Other? 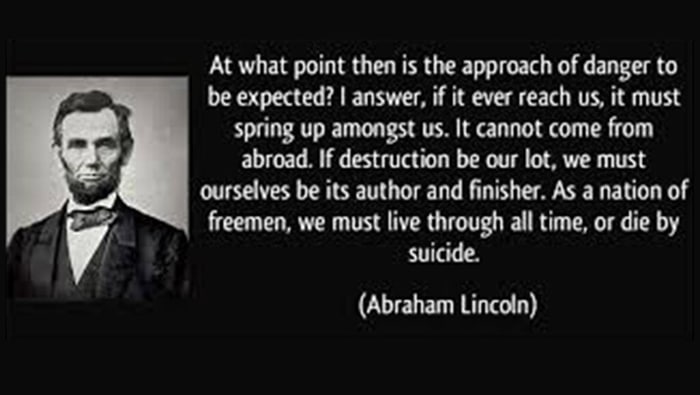 You may wonder what is going on. Why have governors, mayors, city councils betrayed the people? Did you suspect the cowardice now on display? How can months of rioting be condoned? Are robbery, murder, assault and mob rule “what democracy looks like”?

Almost 200 years ago, our nation faced similar issues. Mob rule replaced representative democracy. Murder, by hanging, burning alive, shooting, in the name of justice, “pervaded the country, from New England to Louisiana…” In January 1838, a 28-year-old lawyer confronted these problems. The lawyer’s name was Abraham Lincoln.

America Must Live Through All Time Or Die By Suicide

Lincoln acknowledged that no foreign danger could threaten the United States. “All the armies of Europe, Asia and Africa combined, with all the treasure of the earth… could not by force, take a drink from the Ohio, or make a track on the Blue Ridge, in a trial of a thousand years.”

Lincoln saw that risk comes from within. “[Danger] cannot come from abroad. If destruction be our lot, we must ourselves be its author and finisher. As a nation of freemen, we must live through all time, or die by suicide.”

Although painful to admit, Lincoln observed that “Accounts of outrages committed by mobs, form the everyday news of the times. They have pervaded the country, from New England to Louisiana…” “[B]y instances of the perpetrators of such acts going unpunished, the lawless in spirit, are encouraged to become lawless in practice; and having been used to no restraint, but dread of punishment, they thus become, absolutely unrestrained.” Isn’t Lincoln describing Seattle, Portland, Kenosha?

Lincoln’s fundamental truth: “There is no grievance that is a fit object of redress by mob law.” Anyone who says differently is selling something.

Lincoln observed that “whenever the vicious portion of population shall be permitted to gather in bands of hundreds and thousands, and burn churches, ravage and rob provision-stores, throw printing presses into rivers, shoot editors, and hang and burn obnoxious persons at pleasure, and with impunity; depend on it, this Government cannot last.”

How can today’s politicians excuse their craven cowardice? Betrayal of middle-class Americans, whether 160 years or 3 months ago, has the same disastrous consequences. They cannot claim ignorance. Why have they abandoned their oath to preserve, protect, defend?

Lincoln did not despair. He conceded the glamour of violence. He saw the selfish ambition of those who “thirst and burn” for fame. Our hope, Lincoln said, is that “the people [stay] united with each other, attached to the government and laws, and generally intelligent, to successfully frustrate” the “mobocratic spirit.”

We have faced down enemies, foreign and domestic, before. We can do so again. Not by meeting violence with violence. But by steady devotion to our great nation and the rule of law. Do not despair, persist.
Note: All quotes from Abraham Lincoln, The Perpetuation of Our Political Institutions: Address Before the Young Men’s Lyceum of Springfield, Illinois, January 27, 1838